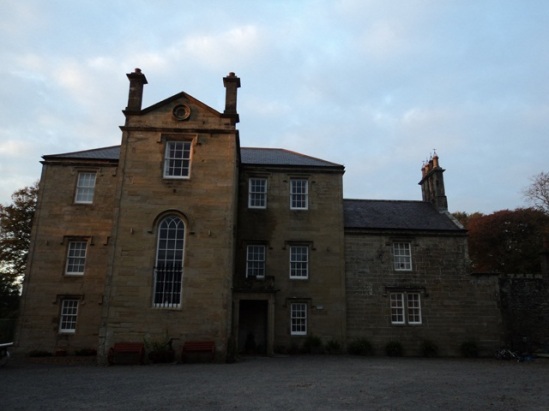 This simple and beautiful village of Kirkpatrick-Fleming is what we encountered during our journey from Leeds to Glasgow. There was the city of Carlisle, the Lake District and this one included in the list. We took an exit to reach this wonderful village of natural beauty. May be this was the soul of the island which stays somewhat similar to what it was in the early Medieval Ages. It had undisturbed natural beauty and smaller buildings and houses along with those smaller roads which had turns and unchecked vegetation on the sides which called for photography. You just can’t ignore them, they call out to you.

This place owes it’s name to the parish church dedicated to St. Patrick, but the parish was certainly not our preferred destination; may be one of the very few occasions when churches and cathedrals took a backseat on a trip which included about fifty churches. It was a camping and caravan site which had more caravans than I had ever seen together. It was a manor surrounded by lots of empty space and natural beauty, but not separated from civilization. This peaceful, picturesque place was the idyll which they mentioned; as I knew Sir Walter Scott’s epic poem Marmion had it’s elements somewhere around there and the hero Lochinvar might have crossed these areas.

Actually none of these was the reason it was a target of my eye and camera, it was because of a man I first knew through Mel Gibson’s multiple Oscar award winning 1995 epic historical drama movie, Braveheart; my favourite history based movie. No, it was not William Wallace, the hero of the movie and the Age of Empires Training Campaign I am talking about; it is about Robert the Bruce, the former King of Scotland. William Wallace, the character immortalized by Mel Gibson, was the tragic hero; the true patriot, but here we have that followed after his execution; as they say in Braveheart: “In the Year of our Lord 1314, patriots of Scotland – starving and outnumbered – charged the fields of Bannockburn. They fought like warrior poets; they fought like Scotsmen, and won their freedom”. This gives the much deserved credit to Bruce, who was depicted as someone with a little opportunism, lack of confidence and confusion in Braveheart giving all the heroics to Wallace. But it was Bruce who lead the battle after the execution of Wallace; he was the man who finally succeeded.

As an English Literature student, Scotland never came into my books that much, but as we keep changing the point of view, just for this one occasion, as there are always two sides to a story, the heroes were the Scotsmen and the English were the invaders. There was the manor, there was the statue of a knight on horse and another knight, both of whom are not given any description. But what was more interesting was the spiders drawn on the side of the boards. My motorbike when unused, was home to better looking and cute spiders, but these were not that kind of local spiders, as these ones had further significance. My spiders are missing anyway and I won’t ask any of you to find them.

As we went further into the interiors of the eighty acre estate woods, we came up across what we were looking for. It was the cave; the place where Bruce went to hide after suffering defeat in the hands of the English. Edward I was searching for him with all his abilities and Bruce sent three months alone in there. It was supposed to be the symbol of fear and failure and devastation of his home country, but there he was to be inspired by a spider which was trying to spin it’s web; it would keep falling, but gets up to try again and again. This gave him the spirit and won the Historic Battle of Bannockburn even as he was outnumbered ten to one. The legend of the Spider lived on and so did the fame of Robert the Bruce, the king of Scotland.

Just like this battle marked the beginning of freedom for Scotland, it was also my inspiration; it helped me to keep trying again and again; it served me well enough to lead me on a path which was corroded and full of gutters to my target without stopping half way through. Every time I want to quit, I look at a random spider with it’s webs; even if it doesn’t look that nice, it is a symbol of the never-quit attitude. I would never clean the spider webs of my room, it will stay there on the roof as it is my inspiration in this mindless room of concrete. Please note that Spider-man, Spider-women or any other genetically mutated spiders of any scientific experiments or accidents won’t count.