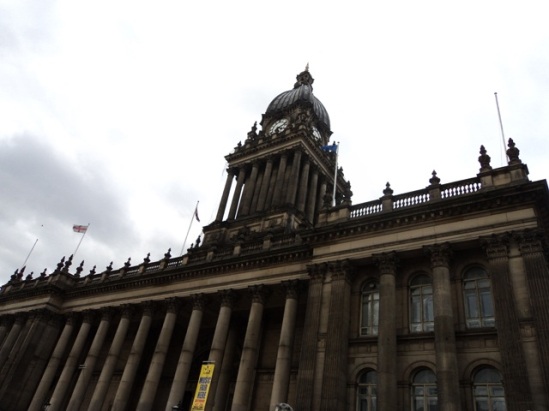 Leeds is my favourite city in England; before I had that opportunity to visit the land, my guess would have been London, Manchester or Liverpool to be my favourites. But for some reasons, or many of them, this was that city which would spend most time in front of my camera, and this was to be that city which I was to prefer the most. The reasons might have been endless, but not all of them what one would expect. I liked the Coat of arms of the city, even if it was quite strange for me after seeing all those emblems with dragons, wyverns, lions, eagles and falcons; I found crowned owls, a hat and a sheep which seemed to be hanging; I failed to make any meaning out of it, but I found the emblem to be a beautiful creation. It was something I could relate with John Donne, George Herbert and the Metaphysical poetry as a whole, an opportunity for the more complicated understanding of objects which are kind of far-fetched images. Those owls with crowns, that hat which looked magical and that sheep; something was there which I could make of it; there was something so hidden in it that I could write a poem out of it in case of the brain working at the right moment.

So many people I knew lived near the city by the end of the tour. My cousin brother already lived nearby and the number of people I knew was raised by a good figure later. Another person whom I knew for a long time, also lived in that area, from the King of the World game in Facebook, a big fan of Leeds United Football Club and Leeds Rhinos Rugby Club; one of the first people I knew through a game application on that social networking site. That was one of the best gaming days online, with the best people from all over the world and this person did play that important role of keeping me glued to the game, as he made an entrance into my side of gaming at the right moment. That was the time when everyone took the game seriously and did wake up late night to start an invasion on the other; it was the time when everybody used to be so determined to have the advantage over the other so that all alliances were broken. As I was making things so complicated, his presence made it more clear and kept me playing the game until I quit it about four or five times, one of them being a mandatory deletion from a cruel Facebook in 2009 with not much of a reason other than an overdose of gaming. But the fact remains that I didn’t really go and see him there; so that episode is left with the game.

I wouldn’t talk about Leeds Rhinos for now; as Rugby is not my thing; if I get into it, that would be like a crocodile talking about Jurassic Park or a dinosaur talking about Lake Placid, both not aware of the other habitat. I wouldn’t talk about the topics which are not mine, which brings me back to cricket, to the Yorkshire County Cricket Club, the home of the most successful team in English cricketing history. Headingley Stadium surely has it’s moments, but Leeds United Football Club was the place to go, as I had to see the first real football stadium which was to bless my eyes. Elland Road, the twelfth largest football stadium in England was my first real football stadium sight even as I never got in and all the view was from the outside only. My only visit inside a football stadium would remain confined to the Jawaharlal Nehru Stadium at Cochin even if that was for watching a cricket match. But I guess it would still count as a soccer stadium as Kochi Tuskers Kerala is a team which is no longer valid and the Ranji matches get less attention than the football matches there; cricket has gone back further in Kerala with that incident and now the only thing which remains is to ask the game not to come back again.

From what I understand from visiting the stadium and it’s store, Leeds United is a rising team which is fighting to gain back it’s glory; therefore I am glad to have visited the stadium and some day they will succeed in their aim and I will then proudly say that I visited Elland Road and I knew this was going to happen; I was there, in front of the stadium, near the Centenary Pavilion and the statue. The road to the stadium had wonderful fly-overs and bridges which gave a powerful effect to the road and a gift to the camera. It was a change at a time when every place looked the same for me; the houses with same colour and style and trees which looked a little yellow and mostly green, it was difficult to find the change; it was a big change from home, but once at the place everything was same, but beautiful. It scored by having that beauty everywhere though. By taking photos almost everywhere, I was becoming a Mr.Bean or something close to it; there was no distinction to be made between the modern and the ancient world there; the beauty existed without exceptions. The newer world was just easier to identify, but the older ones had stories to tell; or may be to figure them out.

The Leeds City Museum gives us the history of Leeds, as the museums of the land seemed to impress in quality compared to what we had at home, as the history and literature had a less important role and is still considered inferior. But what still remains like a burning candle in the mind is undoubtedly the Thackray Museum, which is actually a museum of the history of medicine near St James’s Hospital at Leeds. It was such a wonderful beginning to the journey through England. It mostly had much valued information about medicine, but it also took that long look into the history with it. There were questions like “How did bad French wine help start a scientific revolution in medicine?”, “How did foul smells make cities healthier?” with interesting explanations, sometimes written and sometimes shown, followed by more; there were bottles of medicines and the machines used by earlier doctors. But what would hit us the most are the stories; the way in which life in Leeds moved during the early ages, as it was kind of a huge experience for me as it was exactly like being there during those ages when life was different and there was not much good for the common people of the age. No country was always about glory and richness and that fact was lit there in front of me.

It took us through the life of a few characters of that time, just ordinary people who lived in Leeds at a time of pollution and lack of cleanliness, that life in Victorian Leeds: as we walked through a genuine recreation of the slum streets with authentic sights and sounds and that feeling of being gone some place in the past, as if there was a time machine. There were the big rats, fleas and bugs; there was surgery without anaesthesia as we watch an eleven year old Hannah undergoing amputation of her leg after it was crushed in an accident in a mill at a time children were also working in dangerous conditions. Only the Royal Armouries came close to this experience, but it was still just about weapons and not about people. The Leeds Town Hall was an impressive structure too. The Leeds Anglican Parish Church and the Roman Catholic Cathedral were interesting structures, but nothing could recreate the feeling of the Thackray Museum; as it showed that human misery was almost the same everywhere and there is always the chance for improvement of human life, no matter how bad a situation it is. We are indeed lucky to live in this world of luxury and we are to thank the people who are part of our history, as without them, we are nothing near what we are now; because of them we exist and live a good life with less suffering.