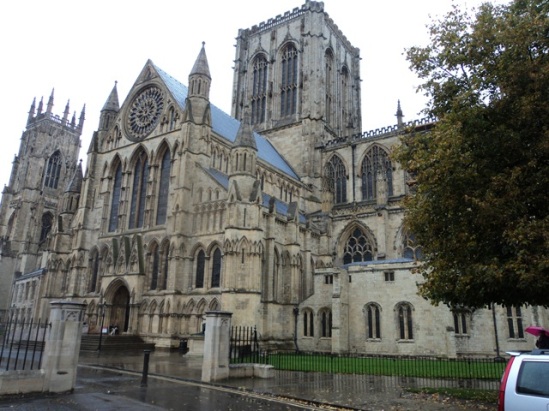 It was a rainy day and I was at a walled city of historic attractions, the city of York Minster and all which followed to make the place a wonderful destination. It was the fort and city in Roman Britain called Eboracum which was transformed into what is now York, as the remains of that conquest from beyond the English channel can still be seen; even as the Roman conquest of Britain began in 43 AD, the city was only founded in 71 AD, and remains are mostly what is left of the walls and fortresses or what is added to them in the later ages. The Anglo-Saxons called it Eoforwic which became the capital of Deira and later of Northumbria. During the viking invasion, they called it Jorvik, as it was dominated by Norse warrior-kings making it a Scandinavian York. The trade relations of the city had extended to the Byzantine Empire and beyond; the Emperors Hadrian, Septimius Severus and Constantius I all held court in the city of York during their various campaigns, and the last one also died in the city and it began the era of his son Constantine the Great, known for adopting Christianity as state religion and also for the Edict of Milan in 313, which proclaimed religious tolerance of all religions throughout the empire; something which was a new thing during that age; also for renaming Byzantium as Constantinople and shifting his capital there, which would later be the capital of the Byzantine Empire or the Eastern Roman Empire for over one thousand years.

There is a statue of Constantine the Great beside the York Minster, not just because of his abilities as an emperor, but also because it was at York that he was proclaimed the next king, following the death of his father; he would later defeat the others who tried to established their claims on the throne and would become on of the most well-known emperors of the Roman world and by his death, he had established a great name for himself across the empires and was buried in the Church of the Holy Apostles which was destroyed by the Ottoman Turks after the fall of Constantinople. Some Eastern Christian churches consider Constantine a saint and so many people wished to adopt his name, as it was of that much popularity and it was an honour to be called by the name of an emperor who was more fit than anybody else to be called ‘the Great’. Constantine was depicted as an ideal ruler, the official standard against which any emperor should be measured; and it was great to see his statue on the side of that wonderful church which was the most amazing structure I had seen until then; the first Minster church I visited and the first of those historic church buildings even as it was not among my top ten churches to visit, but that was to change and it was to rise to the top of that list which had more changes than there were names in that list. The cathedral was going to inspire me with those stained glass and the architecture containing all forms of Gothic style through the ages; the Great East Window being the largest example of medieval stained glass in the world.

The JORVIK Viking Centre was the first place to visit and bring some Viking stuff resting in the mind to life, and the desire to go to the award winning National Railway Museum was there, which was to happen very late on the day giving me an idea about all those earlier railway engines which used to exist as well as those new models in which I could enter; as I knew it might not happen in real life; but first everything else was overtaken by the York Minster, especially when it kept dominating the skyline and asks for some attention. Also known as Cathedral and Metropolitical Church of St Peter, this cathedral is supposed to be the largest Gothic cathedral in Northern Europe and also the largest example of Gothic architecture which comes under the Church of England. It is the seat of the Archbishop of York, the second-highest office of the Church of England after the Archbishop of Canterbury, and serves as the cathedral for the Diocese of York. A church is supposed to have existed there right from the time of the Romans, but the first recorded church goes back to age of the Anglo-Saxons and Northumbrian kingdom. It was being destroyed by people and fire and rebuilt and repaired on many occasions until there was a new chapel built, this time in the Norman style. The construction of the cathedral in the current form would not be complete until the 15th century even as it started in the 13th century, at a time when the Gothic Architectural was more prominent than the others, giving the church building that look which would make even the Canterbury Cathedral look inferior even when it was higher in status and the number of daily visitors compared to York.

The Protestant Reformation had affected the cathedral a lot, as it led to the looting of much of the cathedral’s treasures and the loss of a lotof the church lands due to the policies of Henry VIII. During the reign of Elizabeth I too, there was that effort to remove all traces of Roman Catholicism from the cathedral; there was much destruction of tombs, windows and altars, even as it wasn’t that wide spread as of the man who initiated the process of breaking away from the Roman Catholic Church. But the cathedral is stable now, and looking better than ever; even as there seemed to be a little work going on at one end of the huge building, but considering its size, it was so minute. It was the rain which helped us to reach the church so fast even as the scenes on the outside were so beautiful. There was that Roman Column which is supposed to have stood in a Great Hall of the Fortress of the Sixth Legion of the Roman Empire a.k.a Legio VI Ferrata whose symbol was the bull even as they also carried the symbolic she-wolf with Romulus and Remus. This column, which had collapsed long ago, was erected again at the site on the side of York Minster to mark the 1900th anniversary of the founding of the City of York by the Romans. It looked too old to make an exact comment about it, but a photo was taken; the rain had been preventing more photography by dropping water drops on the camera lens, but there was the need for more and the time was precious, and we went inside quickly.

The beauty of York Minster was beyond comparison on the outside and it remained the same inside. The cathedral has a cruciform plan with an octagonal chapter house attached to the north transept, and the entrance and exit on the south trasept; a central tower and two towers rise from the west front and reaches for the skies; the east end was undergoing some renovations on a comparitively small scale; the shop was located right on the side of the entrace and exit, but as the church is such a huge structure, it has to be considered far enough to take a few steps. There is the option to walk to the undercroft, treasury and crypt where photography was banned; there was the history of the church described from all ages, but what is it without photography as there was so much more to feed the brain later and it was to be forgotten easily; a photo should have reminded of all those which were lost in some random corner of the brain, but it went on lost in the memories. The tower was closed right at the moment we wanted to go up, which was a sad thing; the great opportunity to view the historic city from the top was missed; all I would get later was to be the smaller towers of Our Lady Of Dolours Basilica of Trichur and The Basilica of Our Lady of Vallarpadam at Cochin and a view which was not new; but being at England, the best aerial view was to be what was seen from the mound of the Sandal Castle even as the height was not that much.

Clifford’s Tower, the keep of York Castle is another runied reminder of what followed the Norman conquest of York, only to be destroyed by the rebels to be built again. It was acentre of the royal administration across England, as well as a very important military base, later becoming a prison and then demolished and still the Keep remains as a tourist attraction, even as it won’t satisfy William the Conquerer in any way. St. Wilfrid’s is a Roman Catholic church located near the York Minster; it could be considered to be of nearly moderate size, but in front of the huge Anglican cathedral, it remains as if it is a small chapel or just a part of the shadow of the Grand building. It is built in Gothic Revival style with its arch over the main door having one of the most detailed Victorian carvings ever, and its altar was incredibly beautiful as it was adorned with pictures and statues in such a way as to there was not much left to beautify any more. Upto an extent, it achieved in simplicity and difference, close to what York Minter had; even as the distance in the importance was still too much. The medieval structures never stopped appearing before the eyes, as I walked through those streets which were mostly stone-paved and on other occasions so narrow but still so beautiful that I had to wonder about the beauty of little things which exist as joy forever; thanks to history and thanks to those blessed writers. The joy of being at one of the best Gothic cathedrals in the world was combined with all these features of the historic city and I was a lucky man.