This happened at one of those stores on the way back from Sheffield and so despite my intention to escape from the memories, this one stays. I can remember that my favourite childhood book was Dracula, and that love never really left me. There might be many things that might bring nostalgia for people, but mine is a horror novel. I was indeed looking forward to Halloween in UK at that time until I had to return home due to personal reasons.

Declared “evil” by the common man! *Sigh* But my greatest treasure.

Lot of people did ask about what I brought from UK, and it might have included a lot of chocolates, a small model of the Big Ben, pamphlets, photos and post cards, but there was nothing more valuable than this one, for which I have my cousin brother to thank (there is only one in England, so no confusion about that). This Halloween gift was not a dream come true for me, but a beautiful nightmare taking me on an undead journey.

Now, an early return didn’t stop me. We celebrated Halloween in our own way, as we printed notices about the festival and distributed them to make people aware of it, and on that night, with trick-or-treating, collected the old clothes and money to give them to the orphanages and old age homes. I don’t know what general impression people have about Halloween, but it is indeed a hallowed day as long we can keep it that way, and we have to do something which gives blessings in abundance.

Is that my mouth or jaw? Where is the tongue? The final pose in England!

There have only been a few festivals that I ever cared for. I have been basically against all celebrations. May be the only celebration worth having was actually Halloween. I have never felt that any other festival was more kaleidoscopic than Halloween in all its darkness and the reminder of the other world; nothing more or less chaotic had so much order in it, and there was nothing so close to the harsh realities of life as the magnificent October 31.

There was no other day that I enjoyed more than a Halloween night, and what makes this souvenir special is that Ghostface. Not to forget the hatchet, skeleton arms, vampire cloak, witch plate and all the horror novels which I carried all the way to India from England. There are the treasures that crossed the seas with me. 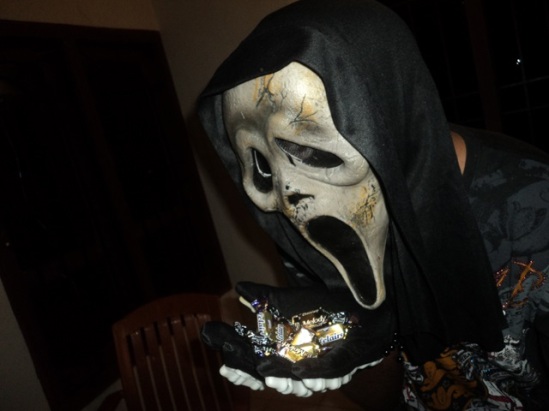 This post is my entry for the ‘My Most Memorable Memento’ contest conducted by My Yatra Diary travel blog and Indian Coupons.