There has been not many places that I have known for this long a time, but Kumbalangi certainly remains one of them. I remember going there with my parents in a boat, as it was more of an island without a bridge rather than just another remote village. There was quite a long time spent looking at the backwaters waiting for the boat. I would wonder if that had given birth to some creativity which I kept for myself. I used to be afraid of the time spent on the boat, and always believed in death by water kept ready by the Grim Reaper himself. But the fact remains that I have traveled there more when there was no bridge, and less when there came that bridge. Thus are the games which fate plays on us. There is no doubt that the place has gotten better, but the fact remains that I myself has no longer the interest nor the need; but I did visit the place a few months ago contradicting my thoughts about not going.

It is located about fourty to fifty kilometres from the Cochin International Airport, and about fifteen kilometres from the Ernakulam South Railway Station. Yes, the place is well connected and there are more than one routes to reach there. There is an older road from the other side of the island, but it is quite a long one which is not recommended due to possible rise in the water levels and the condition of the roads. The first one may be the most commonly used and the most crowded path which goes through Edappally, Palarivattam and Kaloor, going through M.G. Road, and the another one is the same road which takes a small deviation which goes through Ernakulam Jetty and passes near the High Court and these two roads join together later as if they are made for each other. Both routes have lots of city service private buses and Thiru-Kochi buses of Kerala State Road Transport Corporation along with AC and non-AC low-floor buses of Volvo and Ashok Leyland make every fifteen minutes or twenty minutes apart from each other making this the most desirable route if travelling by public transport.

The two were the roads which we used to take when I was a kid, during those journeys to Kumbalangi in the city service private buses which remained the only choice at that time. The second one can be joined by a road which takes right turn from Kalamassery – the Vallarpadam Terminal Road which has the least amount of traffic and has the better roads except for small areas which should have some potholes and unexpected rising of terrain. The next one has a number of busy junctions on the way which goes through Edappally, Vyttila and Marad joining the other road on the new bridge to Thoppumpady, a route having tolls, but not too much to be spent – not that crowded except for those big junctions. Just be aware of the Vyttila junction which might be the busiest interjunction around despite the size of the roads. This road can also be joined from Thrikkakara and Kakkanad if a left turn was taken from Kalamassery towards the HMT junction. It is a clear one road from the airport to Aluva though, as the other possible routes towards the Perumbavoor side are more of the unreliable ones.

You can visit Kumbalangi when you go to Fort Cochin or Mattanchery, taking a deviation from Thoppumpady. The first thing you notice is surely the backwaters and the Chinese fishing nets which are located around – just like a visit to Fort Kochi. Kumbalangi is actually more of a cheaper alternative to Fort Kochi and Mattanchery even as there is not much of a history out there, with Saint Francis Church, Santa Cruz Basilica, Dutch Palace or the Jewish Synagogue, and the development also might seem less. But Kumbalangi Integrated Tourism Village project has been transforming the village and the visit is going to be totally worth the money. The island also has its smaller but beautiful churches, that is for sure – a good number of them on the sides of the main road itself. They are symbols of faith and belief which has disappearing from the world at high speed. I have known most of those churches for quite a long time and did attend mass at more than half of them. There is that beauty in simplicity and serenity out there.

Kumbalangi is the first Model Tourism Village in India, and thus has undergone quite a transformation which has not ceased yet. There is financial assistance from the state government, and the procedure has seen increase in the number of tourists who come to the place, but there is not too much rush till now. It is indeed blessed with natural beauty which has not been seen or explored much. There are smaller roads and not many bigger shops and restaurants are around, but that doesn’t take away anything. It is the ideal destination for everyone who wishes to keep away from the crowd and enjoy peace and calmness with nature supported by whatever joy the backwaters bring. There are many interesting and cheap packages for the same. It will be good if you add the place to the list when you travel to Fort Cochin and Mattanchery, as that should make a good combination. May be you can go through Kumbalangi and reach Fort Cochin through the other side of the island thus going through the centre of the island.

If you do go to Kumbalangi, there is Kallanchery which you can visit. There is also a resort of three acres, surrounded by the awesomeness of backwaters there, called Kallenchery Retreat which is a very beautiful place to spend time – it is Kallenchery Retreat (http://www.kallancheryretreat.com/) and you can check that website for more details. There are not many places like that around. Check this website and you will know about a miraculous church which you won’t want to miss – situated at Kannamaly at the end of the island (http://kannamaly.com/news/kannamali-church/) and the festival there is very famous as people from all parts of Kerala comes there for blessings. I hope none of you will miss that church and it will be even better if you are there for the feast. It also has a history as the first church there goes back to 1745. It is also the native village of our honourable minister of food and agriculture, K.V. Thomas who has also written a book about the place, Ente Kumbalangi. When you visit South India, take your time and have a look at one of the most beautiful backwater villages of South Asia at a cheap rate and a lot of happiness.

I would like to leave you with these images of Kerala Backwaters. (Check Kerala Tourism’s latest campaign on the most fascinating waterworld on Earth @ http://greatbackwaters.com/) 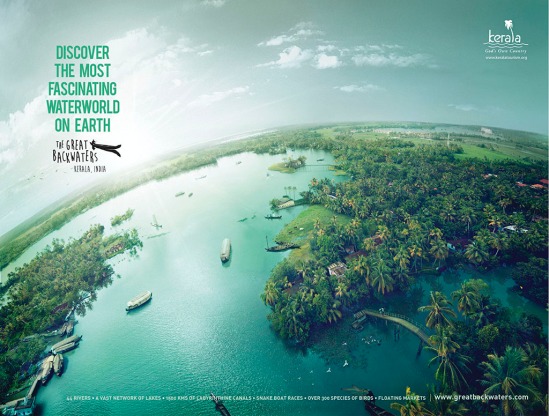